What is a winning moment promotion?

Instant wins are one of the most exciting types of promotion for a brand to run, and there are endless ways that they can do it. Most instant win promotions are advertised on packaging, and require a purchase – some promotions offer a great chance of winning a prize, while others advertise a huge prize fund, yet only give away a tiny percentage of them.

A winning moment promotion usually requires input of unique codes, batch codes or barcodes from products although it might also be a ’no purchase necessary’ promotion – for example a simple daily entry ‘spin to win’ website competition or using an app like Shazam to do a daily scan of a product. In most cases, you’ll find out instantly on screen if you’re a winner! 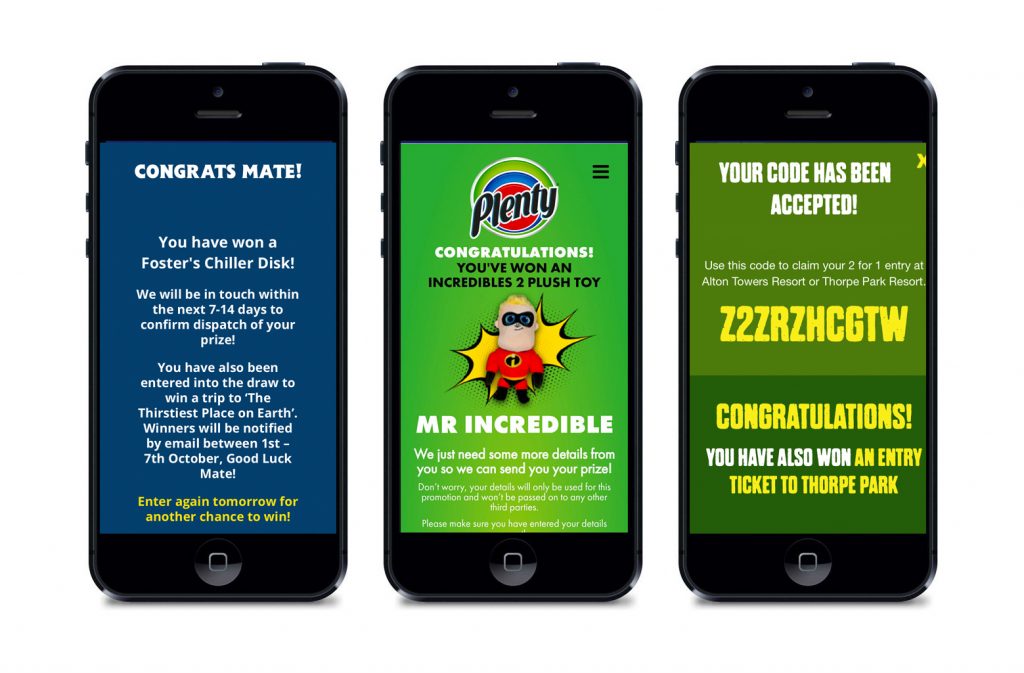 Even though I’ve been comping – and poring over Terms & Conditions – for over 20 years, like many others I still feel bewildered by the small print outlining the mechanics of winning moments and instant wins. Hopefully the explanations and examples here might make things a bit clearer!

Before I tell you more about winning moments promotions, I should remind you that these are different to algorithm type instant win promotions, where a huge prize fund is advertised on pack yet those prizes are only ‘available to be won’. With this type of promotion, every advertised prize will only be awarded if there is an entry for every single promotional product – in most cases, less than 5% of the prizes will be awarded. Find out more about this type of on-pack promotion in my post about misleading instant wins and particularly about the McCain Great British Raffle.

In an algorithm style instant win promotion you have no control over your chance of winning – every entry you made has exactly the same odds of being successful. But in a winning moment promotion, the time of your entry affects your chance of a win – so you can increase the odds!

First entry AT or AFTER a winning moment wins

This is the most common type of winning moment promotion. The ‘moments’ are an exact time, randomly chosen by a computer – if you’re the first person to enter after one winning moment, and before the next, you win a prize!

This type of competition would usually run over 24 hours, so if you enter overnight, when most people are asleep, you have a better chance of winning. But some promoters will distribute prizes so there are more to be won during the daytime, so there may not be an advantage entering overnight. Some winning moments promotions are restricted hours, allowing entries only between set hours of the day – which puts clever compers at a disadvantage!

Enter DURING a winning moment to win

When prizes are awarded to entries during a winning moment, that moment could be less than a second, or as long as 30 minutes! The first person to enter during that time wins a prize. In most cases nobody enters, nobody wins and the prize isn’t awarded – in Jarlsberg‘s 2017 promotion there were 1,032 prizes available to be won, but you had to enter your code during a five second winning moment to win (there were only 25 winners). McDonalds Monopoly is another example, where you can enter online codes for the chance to win cash prizes – in this case, the T&Cs don’t state how long the moment is (it’s presumably less than a second!). A current example is the Poundland Big Clean promotion where you have to enter during a one second winning moment.

Sometimes when there’s no entry between one winning moment and the next, the prize ‘rolls over’ to the next time slot and will be won by the next person to enter – so two or more prizes might be given away between winning moments. Prizes might continue to roll over throughout the promotion – or just until the end of a set period (eg. until midnight that day). At that point, the prizes may remain unwon – or they might be given away in a ‘sweep up’ prize draw at the end of the promotion.

Where prizes do ‘roll over’, if the promotion begins before promotional stock is in the shops there will be a backlog of ‘rolled over’ prizes to clear, and all early entries will be winners!

Some promoters like to mix and match their promotion mechanics, cleverly ensuring they give away a decent proportion of the advertised prizes. They advertise a large number of prizes as ‘available to be won’ instantly via an algorithm – but also guarantee a number of prizes to be awarded after winning moments. This is a cheeky way of ensuring that when the winners lists are released, they will look more impressive than the usual ‘3% of prizes were awarded’ list.

Check the T&Cs of a winning moment promotion and you’ll be able to work out if there’s a good chance of winning.  To summarise, you have the best chance of bagging a prize in a ‘winning moments’ promotion where:

Recently promoters have been rather clever, adding thousands of printable free product vouchers to the list of prizes – meaning they can advertise a generous 10,000+ prizes! A large number of prizes means that winning moments will be on a very regular basis – for example every few minutes, and almost every entry will instantly win a voucher (for a Ribena, bag of Doritos, Cadbury chocolate bar, etc).

Although this means you have a good chance of a prize, it does make it much harder to win the bigger prizes, as there are so many winning moments! For example, between 2am and 3am there might be 20 winning moments, one of which to win a TV, 19 of which are to win Pepsi vouchers. Entering at this hour of the night, you’re very likely to win a prize – but chances are, it will be a voucher! In some promotions, where prizes ‘roll over’ to the next time slot, promoters can arrange for larger prizes to take precedence over the vouchers (to ensure the headline prizes are won) – so you might still want to try that overnight entry!

My current favourite winning moments promotions with lots of prizes:

I hope this post has helped you to understand winning moments and why they can be brilliant for compers – but also why it’s so important to thoroughly check the T&Cs before you decide to spend your money on promotional products!